I am ready to put this BIL and SIL bullshit behind me, and I just found out one more tiny tidbit, that I felt I have to pass on to you…

BIL is Puerto Rican. His father owned land over there, and it was recently sold. Apparently he has 4 siblings that still live over there, and they sold the land, and gave BIL his share, which came out to $20 grand. Yep.

SIL is now planning a trip to Italy.

to brush up on her Italian? not

to visit some distant relatives over there? only if they’re giving her money

to check out the latest in fashion? not

to piss away someone else’s money? fuckin’ A!

Given that the extent of her culinary skills cooking Italian cuisine are limited to spaghetti, I would guess against any future cooking classes for SIL.

Interestingly enough, SIL was invited to do some lectures given her expertise and honorary Master Gardener certification…and again, the laughter.

The wife says SIL is very excited about it…I guess when the opportunity arises to spread bullshit, and show one’s complete ignorance of gardening…must be a heavy burden to bear..all that knowledge screaming to get out.

We frequently have food items that get overripe or go bad or no one eats them, and we cut them up and toss them out by the water troughs for the deer.

The wife dumped a gallon ziploc bag full of chopped up bread, some Cracker Jacks and the like, and dumped it out for the deer. Later, whilst speaking to one of the SILs, she noticed a rather large bird flying over…

As it turns out, ’twas a group of turkey vultures, gobbling up the tasty bread morsels.. 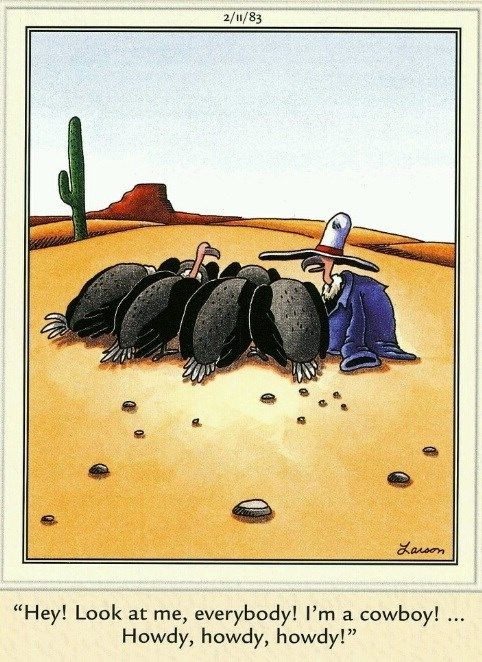