Man, who likes going to the dentist. I am betting that no one likes that trip.
Why? because usually, we are subjected to pain; sometimes mild, sometimes excruciating. Yet, it must be done, or we will eventually succumb to MORE pain.

One visit years ago, I knew I was getting a tooth pulled, and I took 3 Tylenol 3 before going in. The doc gave me so much novacaine that the entire side of my face was numb; chin to eyes to ear. After that lovely morning, I returned to work. I had a hard time answering my cell phone as I could not feel the phone against my face.

Tylenol 3 never had much effect on me, likely due to drug abuse in my youth.

Today was a little different. This was my first female dentist. She was very good with the two extractions. Stubborn bastids they were, as she tugged and sprayed and drilled for quite some time before getting all the pieces out.

I was worried about her humming along with the Country & Western music playing in the background thinking it may be a gimmick to make me think she was cool an calm while cutting into my gums and yanking out the remnants of 50 year old teeth.

I had noticed a propane torch on the counter in the exam room, and I quizzed her about it before she began asking “is that for unruly patients?”

“Could be” she replied.

‘Before or after the procedure?” I further inquired.

“As necessary” she answered quickly.

No pain at all. Gotta love modern chemistry…I do anyway.

No narcotics though. Just extra strength ibuprofen and more amoxicillin.

The novacaine has not worn off yet.

I will likely nap for a while this afternoon.

Today we mourn the passing of one third of ZZ Top, Dusty Hill.

Cause of death has not been established.

The wife had gotten a text from one of her school chums, who had been contacted by the ex-wife on an old buddy with whom I had worked with 30 years ago. This was done through FB.

The X had indicated my old buddy had been looking for me, and I had looked for him as well, finding him living in San Antonio.

The wife returned the text saying that she did not know the X, but I did. Nothing more was heard.

This morning, my daughter and I were drinking coffee and she said “do you know this person?” Same message from her FB.

I replied “did she leave a phone number?”

She did, and I called it

The next 45 minutes were spent chatting with my old buddy about the old days, and some of what our lives had turned to be.

Hopefully, he will get back to me and drop out for a visit. He was a shooter back in the day, and had a fully automatic MAC-10 in ’91. He also had a suppressed AR. He said he had just put together a .308. Back in the day, he drove a Grand National, after he traded in his turbo 300ZX. A Grand National was a turbo charged V6 Buick, that with the right set of chips, he claimed would give a Corvette a run for its money. 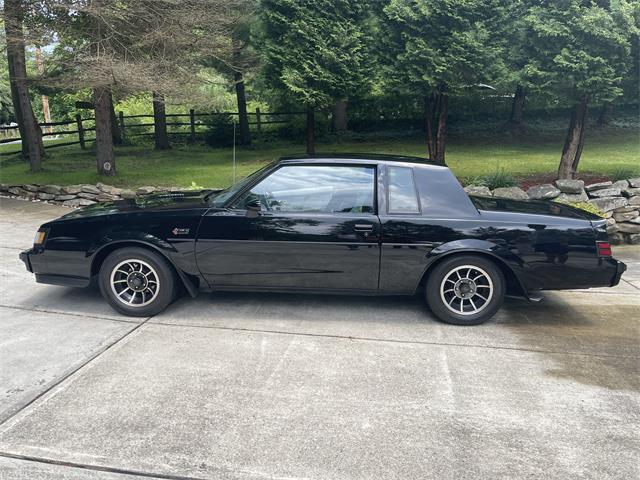 The roofer who had bailed out, has now bailed back in, and will begin Monday doing what he bid. I do not know why he went off grid…don’t care as long as he gets the job done.

The plumbers came and went, and left behind a very nicely done job with the new bathroom fixtures in the bunkhouse. It looks really nice and shiny. The daughter is happy now that she is self contained.

They’re not that expensive, and since all the plumbing is there, it shouldn’t cost that much for install. However, after getting the plumbing bill and a brief heart attack, I could be wrong about that too, and I likely am…wrong that is…ever watchful Murphy.

Anyway, tomorrow is the dentist trip. Another $375 there…hope to get good drugs for the aftermath.

If everything seems right and all is going smoothly, you obviously don’t know what the hell is going on.

Can it be true?

The plumber called late yesterday saying he would be here this morning, and by God, they showed up…a whole caravan. WAHOO!

After giving them the tour of what I wanted done, he indicated they’d likely be here most of the day.

The movers arrived (without the kid…where she was is still sketchy) and unloaded without incident. In and out in about an hour and a half, and the kid spent the rest of the day unpacking some stuff and preparing her bedroom.

I went into town with the kid for a visit to the ATM, smokes, and hardware store to get extra keys and some salt pellets for the water softener, which the plumbers said they would look at. She seemed in good spirits and showed me a couple places where she  had applied for jobs.

The kid announced she wasn’t feeling well, so momma took her back into town to the Urgent Care clinic; likely she has strep…she seems to get it a lot. Oh yeah, she’s allergic to cat, don’t ask me why she lives and sleeps with kittycats.

Meanwhile, for the first time in days, I have an opportunity to write a post, in which I don’t have something breathing down my neck to get done elsewhere.

My trip to the dentist is on for Thursday.

My trip to the new Medicare Advantage doctor is Friday. Got to get established, and likely they will order blood work, which will require a trip to Boerne.

Still no word from the roofer. I am writing him off.

The other guy, bowed out having to get cataract surgery. I may get a hold of him to see when or if he is going to be back to work or not.

Another place I called for estimate, as I looked at their web page and there was a spiel of our tiny town here and how all the local customers loved them, they told me they didn’t do work in our town; period. I said well OK then, and then they called me for two days wanting to set up a time for an estimator to come by…several messages, and I did not return their calls.  was that wrong? I figure you had your chance asshole, and your dumbass receptionist has lost a potential customer.

I still am planning to replace my cell phone as well, now that things are beginning to settle down.

The kid is on her way with all her shit, the movers (that we paid for) and three kittycats.

They should be here right around my naptime.

My plumber finally returned from vacation, and he won’t be here until Thursday; perfect timing as my dentist appt for two tooth extractions is Thursday…greatgreatgreatgreatgreat.

So the bunkhouse has been cleaned, sprayed, and bug bombed. I probably should have brought in my last bottle of Ruby Red Shiner bock…likely the last of its kind from the bunkhouse fridge. No doubt, she will bring a ton of crap to put into my already full refrigerators.

The kid will have to use the house bathrooms until the plumbers are done.

So many things not yet discussed that will have to be dealt with and rules established…yeah like that will work.

I know I’m gonna regret this.

they are 30 minutes out…

and so it begins.

It would seem that every plumber in the area is backed up for a week. My plumber of choice is either still on vacation, or just stopped answering my calls.

The roofers have both bailed. One had cataract surgery, the other, I don’t know.

The dumpster guy has offered to leave the dumpster on a Friday morning, and pick it up on Monday morning, for $400. I’ll likely take him up on that offer, but not this weekend.

The wife and I did some work on the shop, clearing a spot for the washer and dryer, but that was all we could do. I tossed shit outside in the bunkhouse driveway…that’ll have to be removed; soon.

It is unbelievable the stuff in there,,,30 years of worthless tools, screws, nail, nuts, bolts, fishing tackle, racks of PVC pipe, re bars, sheet metal, scrap iron, angle iron, shim stock, broken tools, an old aluminum ladder, an old dresser that my little brother had when he was an infant; solid oak, shelves with fertilizer and various insecticides, several hudson sprayers I tossed, I found an electric whet stone, irrigation line and fittings, extension cords, floodlight bulbs, metal tool boxes filled with rusted nuts and bolts…yes, a couple of old fishing rods and reels..somewhere there is a fly fishing rod in a nice padded roll up container; not one hook, sinker, or bobber. I found a brand new spinning reel still in the box.

The workbench is filled with shit like that…plastic buckets that the bottom has rotted out, a 5 gallon can of roof cement, a gallon can of water seal. a plastic trash can that had once been filled with corn gluten, now broken with that shit all over the floor.

It’s no big deal to look at when one walks by, but to handle every single thing and have to decide “to keep, or not to keep; that is the question” put a different twist on it…and this is just the shop, and I haven’t even gotten to the back of that yet.

Meanwhile, the plumbers I did call have not yet returned my calls. One flat out said they were not taking on new customers; period. The freeze we had earlier this year, and the subsequent damage is still keeping the plumbers busy.

Another indicated they could not get out here until next Friday.

So, looks like the kid will have to tinkle outside.

Life is less complicated here in the country, until we interact with others. Me thinks ours will change forever soon; very soon.

of Hadji, Abdul, Mohammed, and Achmed

as they screamed Aloha Snackbar!

Hadji hold his wallet with a pic of his favorite goat..

Busy today prepping for all the shit coming down.

Roofer has yet to show up…

And only one me…

FUCK! what have I done… 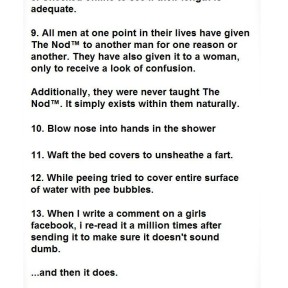 Stole this from The Outrider

What’s not to like. Supposedly these run side by side the Mossberg 500 on the assembly line 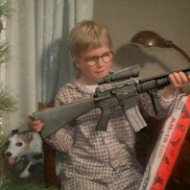 Where did the dog come from?

Stole this from Heroditus Huxley. 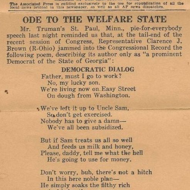 Got from Mike Miles 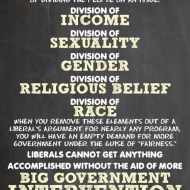 This gun was actually usedd by a hitman on a series called The Intruders. 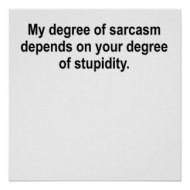 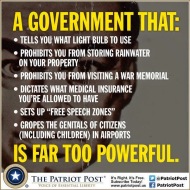 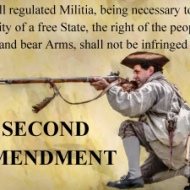 from The Gray Enigma 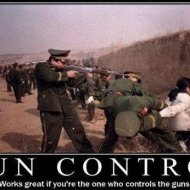 from the grey enigma 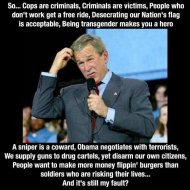 from sarge at herd of turtles

from A Herd Of Turtles

from A Herd of Turtles